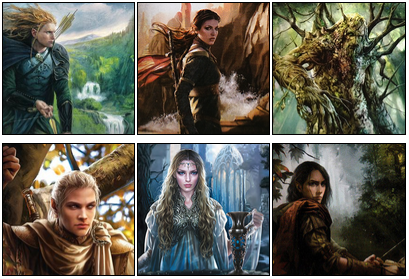 Ally Treebeard made a big impact when he arrived on the scene, and deservedly so. Even today, he is a contender for the most powerful neutral card. When it came time to design a hero version, the developers had big shoes to fill, but they sure came through! Hero Treebeard is a powerhouse. Even in simple builds, Treebeard can pack a punch; throw in some action advantage, and he pulls his weight in both the questing and combat phases. Now, that’s fun and all, his but how can you truly push the limits with him? Well, why don’t you ask the elves?

Join us today, as CoTR shines a spotlight on…

When Elves Talk to Trees

Elves among the trees

What I love about this fellowship is how effectively Zatara gets around Treebeard’s “No restricted attachments” clause. It is worth mentioning that Treebeard’s innate stat benefits last until the end of the phase, so he can go far if you build him up appropriately.

The goal of When Elves Talk to Trees, isn’t just to load Treebeard up with non-restricted attachments; synergy and overall deck strategy is important too. If the title of the deck hasn’t given it away, the linchpin of the strategy is Elf-friend.

As a Noldor and Silvan hero, the options really open up. Now, Treebeard has an option other than Dunedain Cache for becoming ranged: Rivendell Bow. His drawback, of course, is that to maintain an effect attack power, Treebeard has to damage himself. Well, as a Silvan-Ent, he has access to the healing powers of Wellinghall Preservers and Silvan Trackers. And hey, check out that defense stat: pretty good, isn’t it? Put a Cloak of Lorien on him and he’s on par with Beregond; and, wouldn’t you know it, A Burning Brand isn’t restricted, and it’s in-sphere too! Furthermore, since you’ve already got him decked out with healing effects, he can handle the odd point of damage from enemy attacks.

Let’s put this all together: Imagine that you’ve pimped out Treebeard with Elf-friend, Cloak of Lorien, Rivendell Bow, and some action advantage. He becomes a 2-7 willpower, 4-5 defense, 3-8 ranged attack hero, that auto-heals for up to 6 damage every turn from allies alone. That is just bonkers.

I purposely focused on Treebeard in the article, but I would be remiss if I did not mention that the companion deck, Elves among the trees, is a fairly standard Silvan build. This may seem arbitrary, but remember that synergy is key. The Silvans can make use of duplicate attachments once Treebeard has had his fill, and Treebeard: Elf Friend can benefit from O Lorien for a discount on Silvan Trackers. It’s a tight little package, and definitely worth a second look.

One thought on “CotR Fellowship Spotlight: When Elves Talk to Trees”