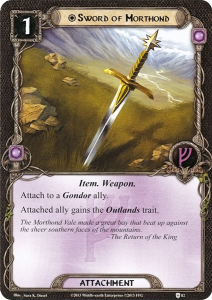 Outlands?! Dare to say that again!
There is no archetype in any game that is as controversial as Outlands. Hated for the simplicity and power it has, but easily accessible by new players, dare I say necessary for those players that don’t enjoy/are not fond of deckbuilding. Most community members that run blogs or podcasts have denounced Outlands for a long time. With time passing by  they were more or less forgotten. The splinter was still there, but the pain ignored.
Suddenly, the designers decided to add two cards that would breathe new life into Outlands. Their real lord and a way to join his service.

Join us today, as CoTR shines a spotlight on…

So, these two new cards, why are they good with Outlands then? Outland allies are good on their own, but there is an interesting card out there called Sword of Morthond, who can give any Gondor ally the Outlands trait. The problem is that most allies you want to get the bonuses from your Outlands allies don’t have the Gondor trait. That’s where card number one comes into play, as Emorlecallor brings up, In Service of the Steward.

This combo allows you to buff an ally with the Outlandsstuff (+att, +wp, +hp..). Emorlecallor has included three great targets in this deck. Gimli and Gandalf are two of them, obvious powerhouses who will get even better with the buffs. Mirkwood Runner is not as obvious though, but a very smart one. As stated, 5 att without counting defense is roughly enough to kill any enemy that shows up. Other options would be ally Treebeard (very good option! neutral and build-in readying), Haldir and Glorfindel.(also very good with build-in readying!)

The other card is Denethor. Denethor goes well in any deck, but up the ante even more in Outlands to pump out those allies. Put in Steward of Gondor and money ain’t no problemo any more. Pairing him with heroes like Elrond and Hirluin allows for bonkers resourcesmoothing. He also allows for a first turn full-on Heed the Dream, so any missing combo pieces can be found swifthly.

A fresh take on an old archetype is never a bad thing. It shakes up the meta and gives new perspective into something that might have grown stale.

Of course, this deck remains an Outlands deck and thus even without combos, it is still very potent. To use the words of the designer: “Enjoy the deck!”.